From an idea to an established Finnish timber processing company 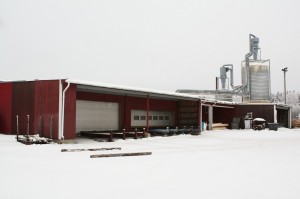 Everything started in 1991.  Due to constantly increasing demand for ground-coated exterior panels, a group of businesses and individuals decided to found a company to satisfy the demand for such services. Thus UPM, the then Wisaforest/Yhtyneet Sahat, Svarvars Trävaruhandel, Påras, Jan-Erik Backlund and Cay Kronqvist joined forces and Nykarleby Ekopaint was born. The company served as a service provider for its owners, with most of the orders coming from UPM. The board chairman was Ingmar Sjöblom, who also served as the head of the UPM saw division at Alholmen timber mill. Kjell Svarvar acted as managing director of both the new company and Svarvars Trävaruhandel.
By the following year it was decided that the company would buy up the Svarvar planing line. This marks the beginning of planing operations at Ekopaint. The cooperation with UPM and other shareholders was going well and production volumes were steadily increasing year by year. 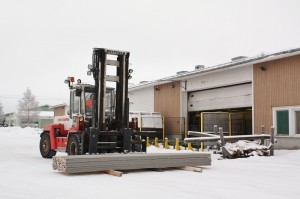 In 1996 a separate building was built for coating panels. Even at this stage, Ekopaint was an industry pioneer, with its modern, new painting facility. When volumes had grown further, with ever-increasing demands placed on planing efficiency, they decided in 2002 to invest in a major new planing and splitting line and a larger warehouse.
After that, various investments were made in facilities in several stages, and when the company celebrated its 20th anniversary in the summer of 2011 it was clear that it had successfully met its goals.
A major change to the business came in 2012, when UPM announced that they would no longer be pursuing operations in timber refining and would thus not require Ekopaint’s services. UPM sold their shares, and shortly thereafter Påras also sold their shares in the company. Today Svarvars Trävaruhandel is the company’s main shareholder and owns the company with Cay Kronqvist.
As there have been changes to the business, Ekopaint is now seeking new market partners.

The company has gone from previously only providing subcontracting services to its shareholders, to now selling its own planed and coated wood products to the timber industry, building supplies dealers and property construction companies in Finland and abroad. Ekopaint is continuing to maintain its position as a pioneer within its specialist area. It has a bright future ahead!